CCAA seeking PAK assistance
Paule ASSOUMOU KOKI was granted an audience last Thursday 25 February at the Port Authority of Kribi to sketch avenues for a modern airport in the Kribi. On Thursday 25 February, Patrice MELOM, General Manager of the Port Authority of Kribi (PAK) received his counterpart the General Manager of the Cameroon Civil Aviation Authority (CCAA). Mrs. Paule ASSOUMOU KOKI came to present the Kribi aerodrome, a plot of 125ha located in the Pongo Aviation neighbourhood and essentially comprising of a laterite airstrip that can accommodate small MA 60 type machines. The General Manager of the Aviation Authority wishes to have administrative and council authorities and equally major companies like PAK put their hands-on deck together with the CCAA in order to extend the current surface area of the airport to 300 ha. In addition, a fence must be built around the area for security so as to build a secondary airport. As concerns PAK especially, Mrs. KOKI wishes to be allotted at least 600 ha in the new city project for the construction of a modern airport in Kribi. Patrice MELOM assured his guest that an airport is currently a must in Kribi, at least for at least a facility to accommodate one plane. It is therefore important to rehabilitate the existing site pending better facility and means. Furthermore, he explained that the national development blueprint provides for an airport in the Kribi though the actual site is yet to be determined. 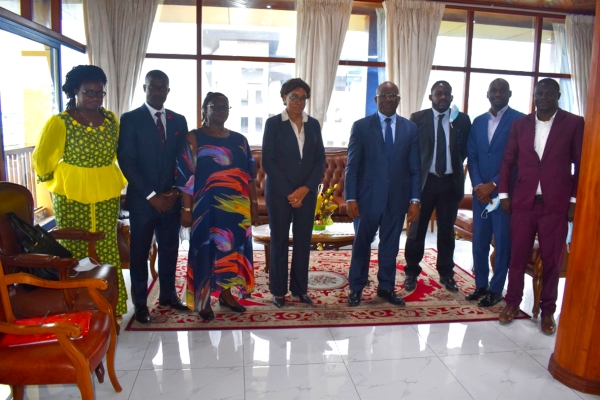 Commending the futuristic vision and the concerted approach of the Aviation Authority, PAK express the need to have the actual situation assessed so as to know what is needed. In this regard, a prior study was recommended in a bid to have an idea of the potential passenger and freight flows. In addition, considering the budding economic zone project in the Kribi port area, it will be interesting for everyone to open discussions in the Ministry of Economy, Planning and Regional Development (MINEPAT), to ponder over the construction of an airport on a Public-Private Partnership (PPP) mode or simply open the shareholding of the airport to other investors. Several avenues have been explored to have a real project for a modern airport take off. PAK and CCAA have already agreed to continue through a working group to be set as soon as possible.